a Glass of Wine and Zee 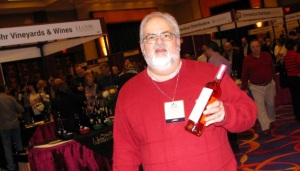 “Age is just a number. It’s totally irrelevant unless, of course, you happen to be a bottle of wine.”- quote by Joan Collins. Or, you are celebrating the twelfth anniversary of the annual Mohegan Sun Winefest. During the weekend from, January 23rd to the 25th, 2015, wine aficionados from all across New England gathered to sample a myriad of over 1000 various locally produced, and imported vintage wines, beers and to experience culinary creations from the who’s- who of Celebrity Chefs including, Chef Todd English, Chef Michele Ragussis and Chef Jasper White, author of “Jasper White’s Cooking from New England”. 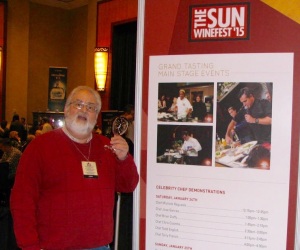 Lillian Greene, age 78, from New London, CT stated, “My doctor advised me that a moderate amount of wine each day may decrease heart disease, so I have a small glass each night. The
WineFest is the perfect place to sample various wines, talk with the vendors, and nibble on all the wonderful foods that are offered”. The Mohegan Sun WineFest ’15 additionally featured some of the finest cuisine from such restaurants including: Frank Pepe’s Pizzeria Napoletana; First & Last Tavern; Matunuck Oyster Bar, and Bloomfield Connecticut’s own Ginza Restaurant Group featuring Feng – with their Pan Asian cuisine.

The Winefest not only included “The Main Culinary Stage”, a backdrop for two days of celebrity chef demonstrations, but also the 11th Annual Mohegan Sun Oyster Open, where the nation’s finest and quickest oyster shuckers competed for a grand prize of $5,000. 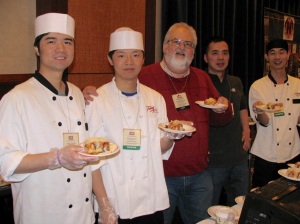 Howard Steven Frydman samples some Asian cuisine presented by William Chen and staff of the Ginza Restaurant a Group.

“The enjoyment of wine is an ever evolving activity”, remarked, James Wallace, Regional Manager of J. Lohr Vineyards & Wines, “the more you are informed, the more you can appreciate your wine, and the Winefest is the perfect place for that education to begin”. According to novelist Ernest Hemingway, “Wine is one of the most civilized things in the world and one of the most natural things of the world that has been brought to the greatest perfection, and it offers a greater range for enjoyment and appreciation than, possibly, any other purely sensory thing.” Enjoy!