THEATERWORKS- I’ll Eat You Last – A Chat with Sue Mengers

One thing that TheaterWorks here in Hartford does “very well” is introduce their audiences to unique tangible subjects of interest- up close and personal- detailing their highs and lows- such as in their past productions- “Freud’s Last Session” and “Becoming Dr. Ruth” – in this current case we are introduced to foul mouthed, pot smoking, super agent to the stars- Sue Mengers- yes I just heard the chorus- Sue who-? I did the same thing many years ago when I was watching for the first time, the 1973 film “The Last of Sheila”, – according to the host of Turner Classic Movies – the character played by actress Dyan Cannon was supposedly based on uber agent to the stars -Sue Mengers- this brought me to seek her out on Wikipedia. Yep- there she was- “Sue Mengers” (September 2, 1932 – October 15, 2011) talent agent to many significant filmmakers and actors of the New Hollywood generation of the 1960s, 1970s and early 1980s.”  Very little detail, lived, died but nothing of her true essence – that is not until this one-person play by playwright and film producer John Logan (Skyfall, Hugo, Penny Dreadful) about the last of Sue- “I’ll Eat You Last – A Chat with Sue Mengers”.

From the get-go actress Karen Murphy is a super-uber tour de force doing lickety split dialogue during this 80 minute performance as the bold and brassy S.M – (Star Maker) or in the new vernacular a “Tinseltown Diva” – as introduced – we quickly buy into this moviedom matron, dressed in a flowing psychedelic kaftan, oversized tinted glasses, cigarette or rolled reefer in hand, lazing barefoot on her chaise lounge at her luxurious home in Beverly Hills, eating chocolates, downing vodka, and dishing the real unfiltered dirt on stars and friends alike while we learn about her life. Born in Germany to Jewish parents, arriving in New York at 5, learning English by going to the movies, her first job as a receptionist at MCA and her rise to the top agent in Hollywood.

“This play contains profanity, smoking, alcohol consumption, drug use, and gossip” – gossip? Let the games begin! As the play begins- Sue is preparing for one of her “A” list only soirées- the guests- “Twinklies” as she describes them- at the time, the likes of Ali McGraw, Steve McQueen, Faye Dunaway, Gene Hackman, Ryan O’Neal, Peter Bogdanovich, and Dyan Cannon- etc and various other Hollywood royalty – and she represents them all! However on this evening, with phone close by- she awaits one special call from her biggest and oldest client- Miss Barbra Streisand – who has just fired her. As we all await the call, Sue dishes out some delectable gossip to a welcoming audience from her first client Julie Harris, a visit to Sissy Spacek’s mud-filled farm to how she landed Faye Dunaway the lead in Chinatown.

Mengers- equal parts Lucretia Borgia, Joan Rivers and Pearl Mesta ( yea I know Pearl who? – look her up! Hint- a musical was written about her). I don’t rightfully know if a musical will ever be written about Sue- but I enjoyed this quick witted insight into this glittering “Twinklies” filled world of 1970’s Hollywood – now best seen on a classic movie channel. Logan’s play delivers on portraying her personality, her wish to succeed and her love of all things celebrities. Sue’s parting words- “I’d like to ask you to stay, but look at you!” My suggestion- invite yourselves to this exciting slice of Hollywood and take your own look at this Tinseltown diva – I’m ready for my close up what about you? 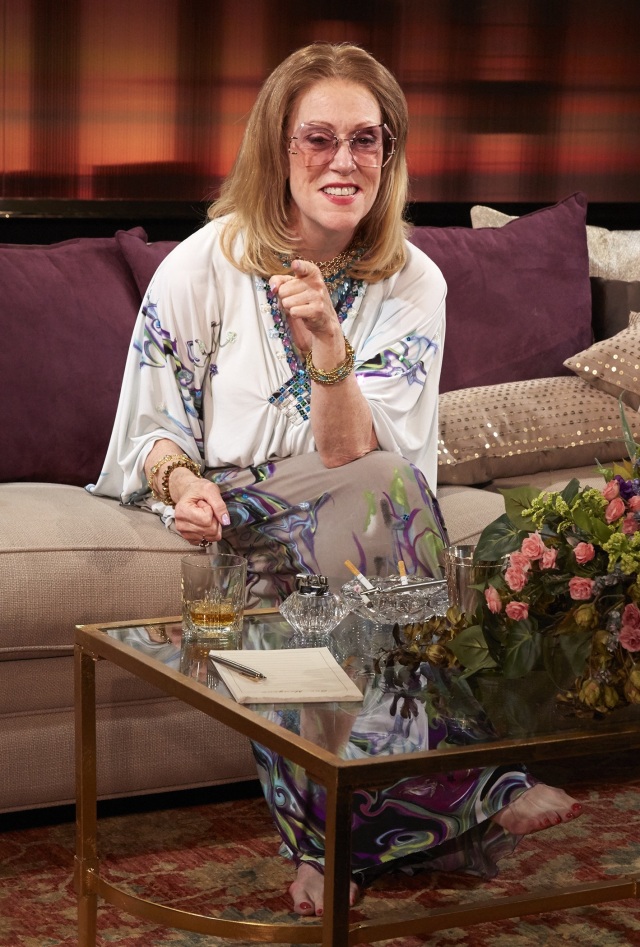