theater review … an opening in time

“An Opening  In Time” 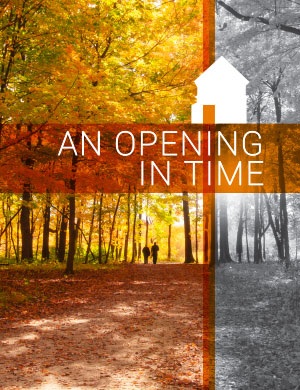 “My hometown is the greatest place I know- Where the neighbors I find are gentle and kind- And the living easy and slow- My hometown is the only place to be-“ I remember these lyrics supposedly written by Aunt Bee on the old “Andy Griffith Show” – episode “A Singer In Town.” How often as a child I wished my hometown in Bloomfield was like that seen in a weekly sitcom – I guess we all do, including OBIE winning playwright Christopher  Shinn, who deftly and oh so sensitivity brings us back to his own childhood home of Wethersfield Connecticut in his new play, the engaging and thought provoking ” An Opening In Time” currently having its World Premiere in the newly renovated Hartford Stage Theater in Hartford, Connecticut. 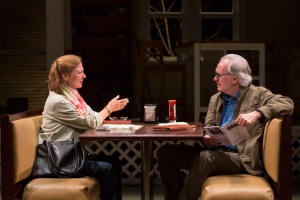 A memory- a sound, an aroma, a time, a town. We all harken back to a day of yesteryear like a favorite food, song, TV show or even an unredeemed love- can we go back for a second chance and relive an Opening In Time? For Anne, a widow and divorced Ron, both well- passed AARP enrollment, still hearts still beat true – can they recapture what they each thought they once had 20 years ago and find a way back to love? As the production begins, amid a backdrop of residential New England style colonial homes, we meet Anne (compassionately portrayed by Obie Award Winner- Deborah Hedwall) a retired teacher, who’s husband had passed on one year previous, and has returned to her home town after many years away. At the local diner- we meet an odd assortment of local townies including Anetta- the diner owner, Frank- “town know it all” and the lovelorn Ron (portrayed by Patrick Clear) a former drama teacher at the high school. Secondary characters interject throughout including Anne’s teenage neighbor George (creatively portrayed by Brandon Smalls) with secrets of his own, and The Detective (Mike Keller) who is detecting why someone is breaking the windows of Anne’s home. Romance, secrets and going home- the scene is now set – can one truly go home?

Two things come to mind when I put fingers to my laptop regarding this play- firstly, not since Jacques Lamarre’s adaptation of “I Loved, I Lost, I Made Spaghetti” which had its premiere at Hartford’s TheaterWorks and also dealt with lost love, has so much food appeared and had been eaten on stage- by the time I left the theater I felt the actors and I had gained 10lbs- from Apple pies, cheesecake, pizza, tuna melts, salads, and even Spinach Pie with Feta – Spanakopita- and the dialogue contains so many references to local restaurants- Dunkin Donuts, Friendly’s etc. I got the impression Mr. Shinn had been locked up while writing this play and all he really could think about was food! By the way I fell in love with Anetta the Greek diner owner and chef- ( stole the show- Kati Brazda-) her role could have been beefed up with more comedic moments – but she was center stage whenever she appeared. And second to mind – after the first 20 minutes my head was turning cartwheels in regards to the stage contrivance of elevated sets that went up and down and down and up. I was ready to yell out “enough already” with diner sets disappearing and reappearing into the floor- it really took away from the gentleness of the story – save the floor openings for the upcoming “A Christmas Carol”. 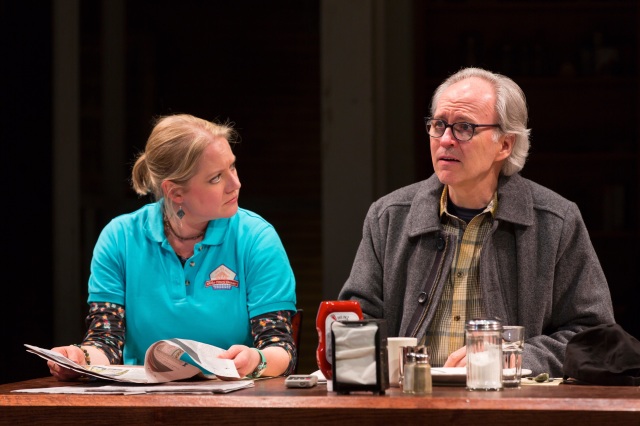 I do welcome you to also enjoy this singular homespun tale of love lost and found- Christopher Shinn’s “An Opening In Time” is a true homage to small towns, the folks who live there and to finding love at any age. I am also in deep appreciation that “An Opening In Time” had its World Premiere here in Connecticut and at the greatest place I know – The Hartford Stage- theaters own home town! Enjoy!

An “Opening In Time” is currently being produced at the Hartford Stage. Tickets & Performances
Tue, Wed, Thu, Sun at 7:30 p.m.—Fri, Sat at 8 p.m.—Sat, Sun at 2 p.m. For tickets, please call the Hartford Stage box office at 860-527-5151 or visit http://www.hartfordstage.org.
Howard Steven Frydman is General Manager and Executive Director of BATV – Channels 5, 95 & 96