Tears of Joy freely flow at this most wonderful time of the year!
I freely admit to all – that the Hartford Stage’s annual holiday production of Dickens’ “A Christmas Carol – A Ghost Story of Christmas”, now celebrating its 20th anniversary, still brings a tear to one’s eye while making one’s spirits light as a feather, and disposition bright as new fallen snow at its heartfelt conclusion – and that my friends is indeed a good thing!! Thank you Hartford Stage for these tears of glad tidings – as they say – “If there is an essence of Christmas in the air – then there is Christmas in your heart”!

I unabashedly “love” this Yuletide production and its ability to sentimentally embrace the true spirit of the season. As I have stated for these many years- a visit to The Hartford Stage to see “the” original Michael Wilson production, currently being directed by Rachel Alderman, is “The best holiday gift” you could give to one’s self, as you join with family, friends and “Fan-Fans” (a fan of Scrooge’s sister) coming from far and away, back to Hartford, Connecticut, to see this extraordinary event! Seen it once, twice, or every single year for the past 20 years, with childlike eyes- we all still sit in ghostly anticipation of what’s to come, our annual sojourn to Victorian London, a rendezvous with that lovable scallawag, Ebenezer Scrooge, and a most delightful reunion with a trio of holiday spirits be it past, present or future! 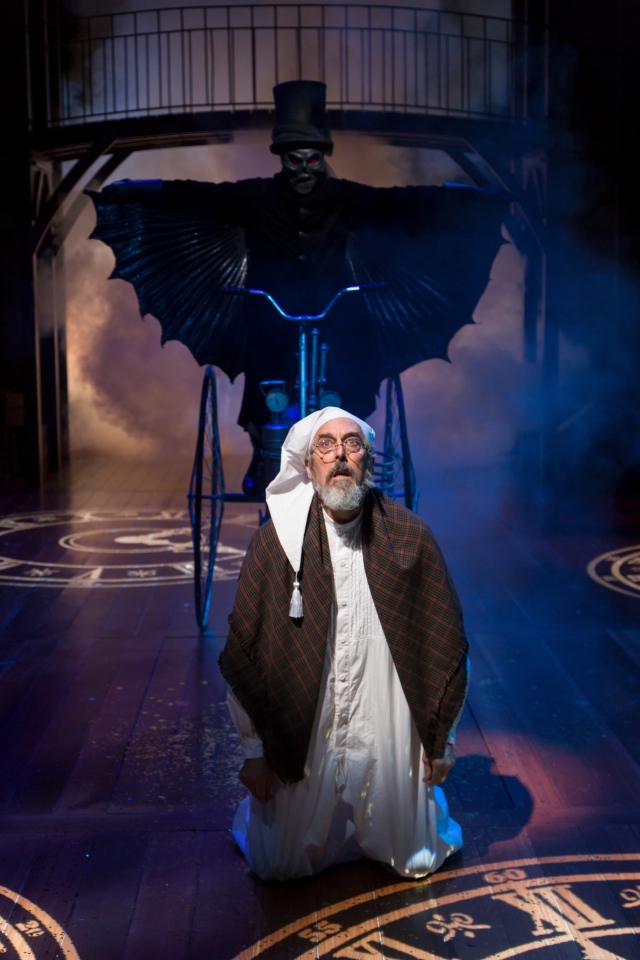 For this two decade’s young production one would expect some changes and there are several in store this year. I must admit after seeing this perennial holiday favorite for most of its 20 years, I am in a personal period of adjustment. Alike many a “Doctor Who” sci-fy fan out there, let’s call ACC2K- a “regeneration” with a new E.S. and several new “companion” cast members – and of course the chatter will always be “Who was the better Who”? For those like myself who have seen it multiple times are aware, this is the first year without two of the plays original cast members Bill Raymond as the “elvish” Scrooge and Johanna Morrison as the most regal and elegant “Spirit of Christmas Past”. Truth be told I miss them both. Michael Preston has now taken over the lead as “Ebenezer” – with a portrayal more darker and diabolical in tone minus many of the “wink in the eye” comic bits of his predecessor. 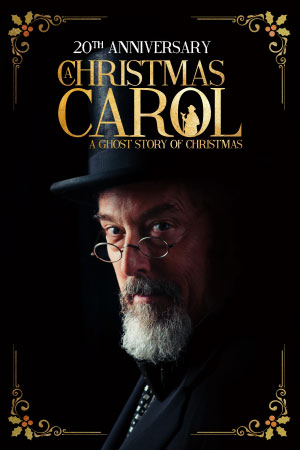 However, for you Dicken-aficionados, Preston’s performance plays closer to the 1951 film version starring Alastair Sim, and friends that “Ol Scrooge” – “scared me to death”- and I loved it! For you F.O.S’s – “Fans of Scrooge – belay your fears, Michael Preston who had formerly portrayed Mr. Marvel, is an “Amazing” actor, taking us on a new “see it through” journey with novel twists and turns to this iconic role- and what a good juggler to boot-(please feel free to expand the juggling ala W. C. Fields). We are proud to see a new portrayal of Scrooge with so many unseen new facets. Michael please feel free to make your Scrooge persona your own, alike that prize holiday turkey- we enjoy both the light and dark side of Scrooge – and this my friends is another good thing!

Noble Shropshire as the Ghost of Jacob Marley

The absolutely remarkable Noble Shropshire, steals this production hands down, his portrayal of the- eerie Ghost of Jacob Marley and Scrooge’s amorous and most beloved housekeeper Mrs. Dilber, brings cheers and applause at every turn of his chains or duster. Bravo Mr. Shropshire! 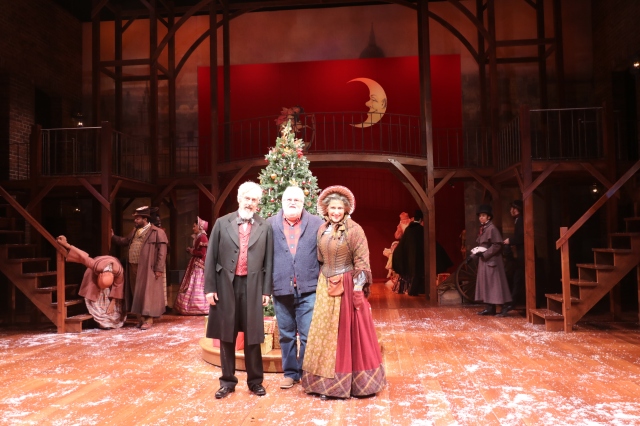 Regarding additional cast changes, the Hartford Stage welcomes, Rebecka Jones, (who previously portrayed Mrs. Fezziwig and Mrs. Cratchit) now donning the role of Bettye Pidgeon, Spirit of Christmas Past and Krusty Old Josie. Let me state, that Miss Jones soared, sparkled and shined throughout, we take note that she expresses so much emotion through her passionate and so lively “Natalie Brown-esque” eyes! In the second act, Miss Jones most definitely comes into her own as the deliciously cranky Old Josie. 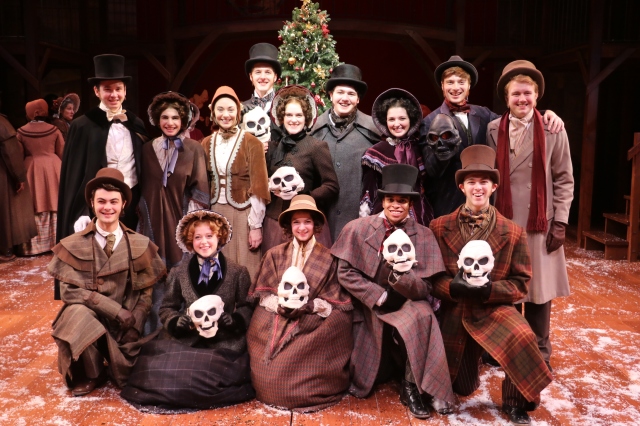 Twenty years of “The Carol” – once again you will believe that miracles are possible, that blithe spirits of past, present and future can actually turn those with “Hum-Bug-itis” into believers of the wonders of Christmas,-especially with a little help of the elixir of life. I happily join Fan-Fans”- (yes more fans of Scrooge’s sister), Tiny Tims and Tim-ettes, Marvel-maniacs, Cratchit-heads, Dilber-Roos, Scroogies, and anyone who has ever been invited to Nephew Scrooge’s holiday party and has partaken in a game of “I love my love with a “B” — to see this production that truly brings a tear to one’s heart and soul. If you’re feeling “frozen” during the holidays let Hartford Stage warm your cold cockles with this awe inspiring production. Yes in deed it’s a most wonderful time of the year-
Wishing all a very Merry Yuletide and a Happy Turning of the Calendar. Enjoy! 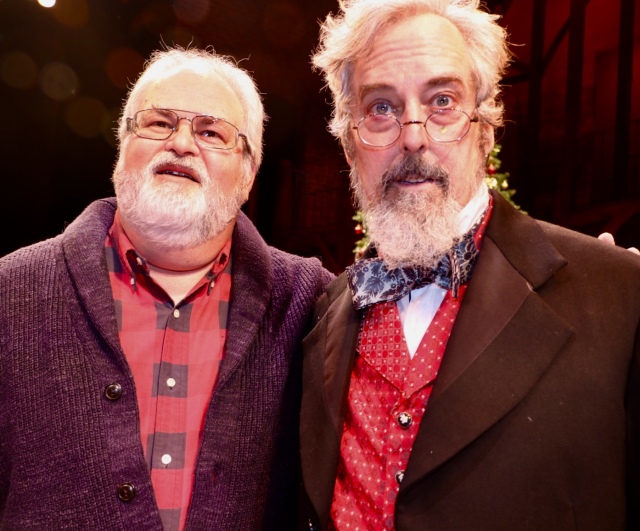 Tickets for the Hartford Stage production of “A Christmas Carol – A Ghost Story of Christmas” are on sale now and can be purchased by calling (860) 527-5151 or by visiting
http://www.hartfordstage.org. The production runs November 24th through December 30th. Weeknight and evening performances begin at 7:30 p.m. Matinee performances are Saturdays, Sundays and select weekdays at 2 p.m.

Howard Steven Frydman is General Manager and Executive Director of BATV – Channels 5, 95 & 96 and a member of the CCC. Please feel free to contact Mr. Frydman with your thoughts and ideas at Howards2424@gmail.com.