“Between the dark and the daylight, When the night is beginning to lower, Comes a pause in the day’s occupations, That is known as the Children’s Hour”.

For close to an hour, of a 90 minute production, I have just sat in awe – in sheer wonder, transfixed by four wunderkind, four phenoms, four children who take total command of the Hartford Stage as they lead us into a world of both shelter and escapism that leads one to their world of “Make Believe”. 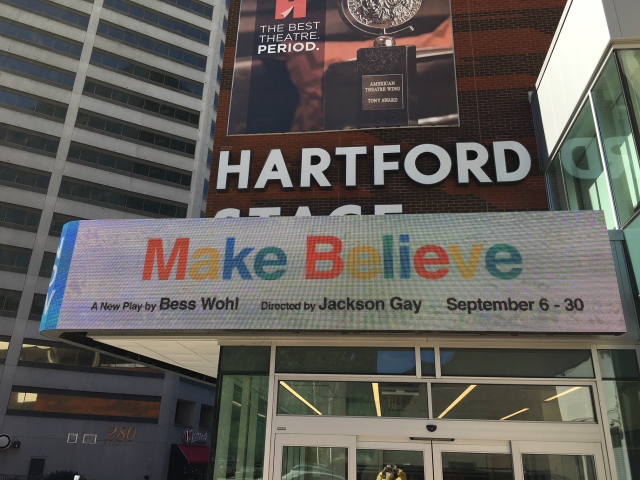 As stated, let me tell you, for over 45 minutes, the first half of this superb Bess Wohl play, these young actors are in command of the stage, every word they utter, every movement they make- the audience is under their control. It is a rare moment in theater when you recognize that an audience is mesmerized by what they are seeing on a live stage and ultimately participating in something quite amazing- case in point – Wohl’s “Make Believe” – set in the still innocent ‘80’s, where four siblings face challenges from their uncaring, unseen, self-centered parents, while maintaining their childhood, their love for each other and ultimately confronting reality and truth.

While audience members are still arriving and taking seat, on stage a child appears, first one than another, playing innocently, flittering one way and than another, among a “playroom” littered about with toys of youth, stuffed dolls, frisbees, pound puppies, intermixed – one takes note of the green ceramic Godzilla lamp, a stuffed black bear guarding a makeshift child’s fort, and the strange selection of movie posters displayed on the playrooms outer walls- from “Krull”- about an evil creature called the ”Beast”; “Hawk- the slayer” about warring brothers; “Little Monsters”- monsters who sneak into children’s bedrooms at night, and even “-E.T. the Extra-Terrestrial” about a lonely boy and his “friend” who wants to phone home”. Wow- quite a bit of foreshadowing as our youngsters slowly don sheets and flutter about as ghostly sprites. Lions and tigers and bears “oh my”! boo- there be monsters underfoot.

“Mom, mom mom mom mom mom- mommy – Where’s our Mommy! – Where’s my snack?! Here we meet, Addie, Kate, Chris and Carl. All alone…no mother, no father in sight. Four children left home alone to their own devices- who will take care of them? A phone rings periodically, “mommy said not to answer the phone”, – the hairdresser leaves a message about a missed hair appointment. “Where’s mommy”? Throughout the production messages on an answering machine provide insight and more questions than answers about these missing parents. Alone, the children play, do school work and longingly wait for their parents to come home, yet there be monsters afoot and more questions such as  – where does oldest child Chris find the money to purchase food for his brothers and sisters, including beer and cigarettes and why does he always have candy in hand. Many of these questions are brought to light during shows transition as the now adult children are reunited years later and bring back folded away old memories of their youth and their time in the playroom.

Major kudos to playwright Bess Wohl –  a graduate of Harvard and the Yale School of Drama. She weaves an absolutely stellar tale of lost childhood and uncaring “lost in the world” parents – at times “Make Believe” reminds one of a classic “Twilight Zone” episode depicting an idyllic world –  the playroom –  where children play, few adults enter, yet where monsters surround. We must take note of the outstanding creative team, including that of Set Designer Antje Ellermann and Costume Designer Jonghyum Georgia Lee. 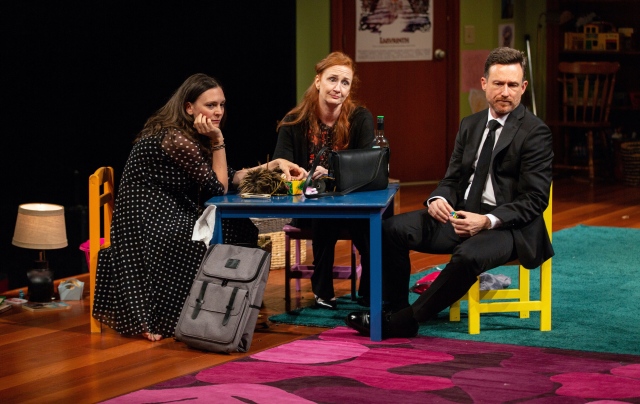 Though this is a cast of eight, and all our adult actors are stellar in performance, there is a reason why comedian W.C. Fields is attributed in saying, “Never work with children or animals” – they steal every scene. It is nonetheless as true here of our four young actors who literary steal the “whole chebang”, they are all adorable, and truthfully gifted actors. We are proud to provide the coveted “Howard’s Future Star Awards” to Roman Malenda, Alexa Skye Swinton, Sloane Wolfe and Mr. RJ Vercellone- bravo all! We look forward to Bess Wohl’s plays next foray – first to Broadway and eventually to the Silver Screen. Enjoy!

Tickets for the Hartford Stage production of “Make Believe” are on sale now and can be purchased by calling (860) 527-5151 or by visiting http://www.hartfordstage.org. The production runs through Sunday, September 30th.  Weeknight and evening performances begin at 7:30 p.m. Matinee performances are Saturdays, Sundays and select weekdays at 2 p.m., Friday and Saturday evening at 8pm.

Howard Steven Frydman is General Manager and Executive Director of BATV – Channels 5, 95 & 96 and a member of the CCC. Please feel free to contact Mr. Frydman with your thoughts and ideas at Howards2424@gmail.com