And so the summer of ‘19 begins…if you are a musical newbie or even a Broadway aficionado – for a sparkling, “Seventy-Six Trombones” of a good time, I strongly suggest you begin your summer with a sojourn to the Goodspeed Opera House, as they launch their season with “Meredith Willson’s The Music Man” starring Edward Watts as that most beguiling Professor Harold Hill and directed by the “oh so” gifted and visionary Jenn Thompson.

In the world of iconic and honored musical productions, one must agree that “The Music Man” and its character of Professor Harold Hill would head up anyone’s roster part and parcel of the best of Broadway – winning five Tony Awards including Best Musical. In fact, The Music Man was the absolutely first musical as a youth that I ever saw performed on a live stage, and I so vividly remember meeting the legendary musical star John Raitt who was portraying Hill at the time. It was a memorizing event, and ever after – as they say, I was hooked on Broadway musicals.

Since it’s opening in 1957 at the Majestic Theater on Broadway, staring “Hill” originator- the one – the only “The Professor” – Robert Preston, theaters goers have been raving for generations over this grifter, con-man and flim flamer – oh my!!! For you newbies – here is the un-frittered, rebuckled knickerbockers below the knee, Captain Billy’s Whiz Bang tale about Trouble with a capital “T” that rhymes with “P” that takes place right here in 1912 River City, Iowa.

Edward Watts as Harold Hill with the cast of Goodspeed Musicals’ The Music Man, playing now through June 20 at The Goodspeed. Photo by Diane Sobolewski.

The grifter as you can already surmise is the charismatic Professor Harold Hill, (Edward Watts) who originally sold/scammed folks selling steam powered automobiles, until someone actually invented them. His new scam- posing as a Music Professor and promising gullible parents that he will form and ultimately train a River City Boys Band  – “think Beethoven’s Minuet In G”, all the while selling musical instruments and band uniforms, yet planning to flee as soon as he can scam as much money from the town folks. Into the mix, Harold’s old friend Marcellus Washburn, (Juson Williams), who has gone legit, but warns his pal “Gregory” that the straight laced Librarian and Music Teacher, Miss Marian Paroo (Ellie Fishman) may be the one big threat to his boy band ploy.

Edward Watts and Ellie Fishman in Goodspeed Musicals’ The Music Man, playing now through June 20 at The Goodspeed. Photo by Diane Sobolewski.

Folks – as many of you already know – I so literally enjoy leaving a musical production humming, whistling, snapping my fingers as I relive memorable scores. Being that this is a classic musical – you are indeed in “harmonizing heaven” here with such memorable songs including; “Ya Got Trouble”, “Goodnight My Someone”, “The Sadder-But-Wiser Girl,” “Marian the Librarian,” “Shipoopi,”,  “Till There Was You,” and those duo rousing crowd pleasers – “Seventy-six Trombones” and “The Wells Fargo Wagon”. 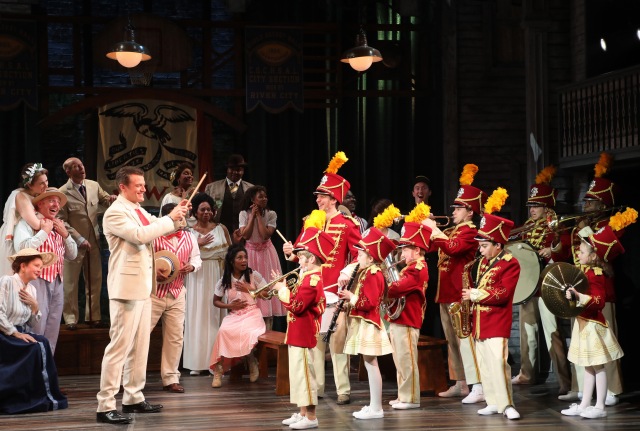 The cast of Goodspeed Musicals’ The Music Man, playing now through June 20 at The Goodspeed. Photo by Diane Sobolewski.

The hallmark of any Goodspeed musical comes down to three criteria- their vibrant production,  production, and more production- the sets, dancing, costumes, lights and of course first class actors who are performing and providing us a grand and oh so impressive stage experience. Music Man indulges all our senses with such great favor, that we give a humble bow and kudos to all, especially Director Jenn Thompson, Jenn Thompson,  Jenn Thompson – say it softly it’s almost like praying- (sorry wrong musical this is not “West Side Story”) but we must truly recognize her praiseworthy visionary contribution in making this production so memorable and a not to be missed theatrical event.

As for our performers, Edward Watts as the “Professor” shows tremendous power and range, many of us so rightfully can only think of the incomparable Robert Preston when it comes to Music Man, but when Edward takes on the extensive “Ya Got Trouble” in the first act, we nod appreciatively, sit back and savor his interpretation. We also must state that Ellie Fishman in her portrayal of River City Librarian Marian Paroo has a “voice” – an exquisite singing voice, clear and stirring, not to be missed – we so enjoyed her vocals in “Goodnight My Someone,”.

We wish we could single out everyone in this huge cast of 39 – let me state you are all impressive in your respective roles. We do want to present two coveted “The Howard” Noticed You Awards, firstly to Juson Williams as Marcellus Washburn, what stage presence, and so enjoyable in “Shipoopi”, and to Miss Amelia White as the widowed Mrs. Paroo, she reminds one of that great comedian Pert Kelton. All eyes are on both Amelia White and Juson William whenever they appear on stage, they both added greatly to our enjoyment of this production.

Well friends, we have to state that “The Music Man” – it’s terrific with a capitol “T”  and that rhymes with with “G” and that stands for Goodspeed. Indeed the Goodspeed Opera House in East Haddam is starting their season with a rousing classic musical celebration that I strongly urge you not to miss. Enjoy! 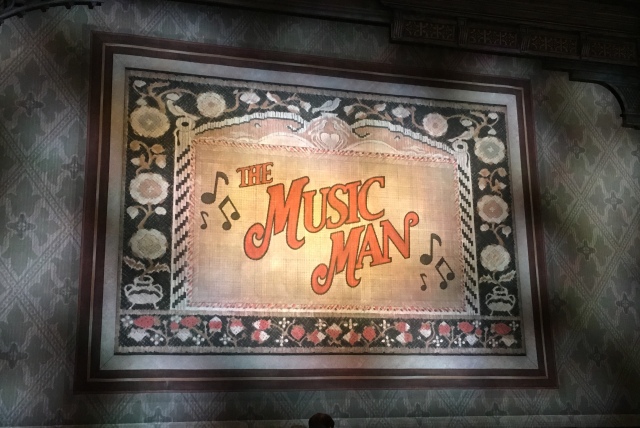 Howard Steven Frydman is General Manager and Executive Director of BATV – Channels 5, 95 & 96 and a member of the CCC. Please feel free to contact Mr. Frydman with your thoughts and ideas at Howards2424@gmail.com.