Well – “Sweet Ginger Brown!” The talk of the town- the world premiere of the new musical “The Flamingo Kid” – directed by that “wonder-kin”, Darko Tresnjak-  who most recently brought us, “A Gentleman’s Guide to Love and Murder”, and “Anastasia”, with “The Flamingo Kid”, Darko’s final production as Artistic Director at Hartford Stage, he has indeed done it again, presenting us another sure bet that this production will soon be “Broadway bound”! 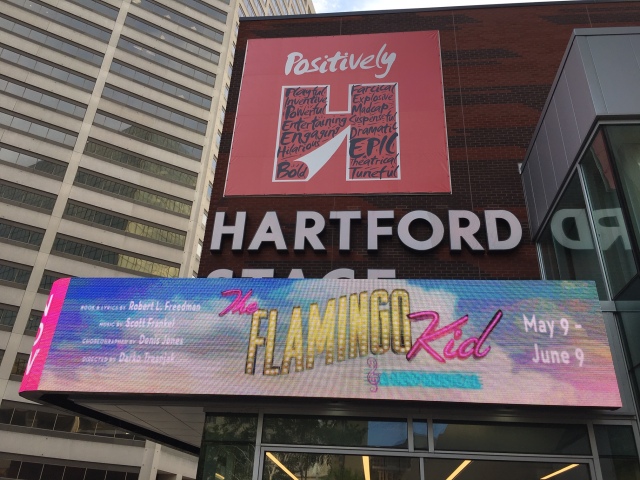 I must state, Connecticut’s Premiere theater- The Hartford Stage – is currently offering “oh so lucky” theater goers the ultimate experience, the hottest pre-Broadway ticket, “The Flamingo Kid”- it sparkles, it shines, it’s a saucy Coney Island Ferris wheel of a theatrical ride. Most importantly, it absolutely leaves one “kvelling“ with delight, from the neon scenic design by Alexander Dodge, those groovy costume designs by Linda Cho, and with Book and Lyrics by Robert L Freeman, Music by Scott Frankel, – I rightly say “Mazel Tov” to this creative team. 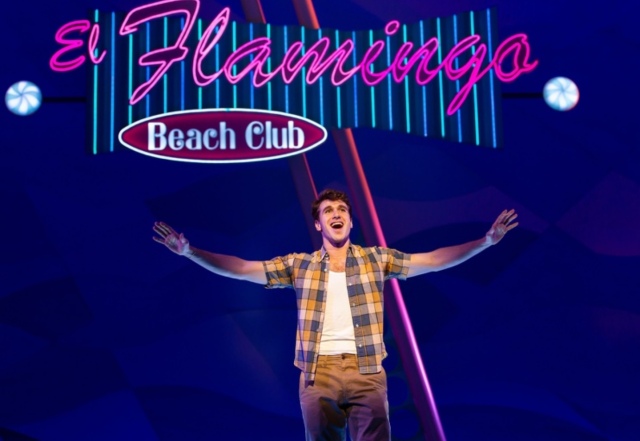 This production is based on the 1984 “coming of age” comedy release, directed by TV icon Garry Marshall (Happy Days, Laverne and Shirley, Mork & Mindy) and originally starring Matt Dillon, as “the Kid”, and Richard Crenna. The time – the summer of ‘63, the place-  a swanky private Jewish Long Island Beach resort – “El Flamingo Club”. For many a relaxing summer includes, sitting by the pool, sipping a Long Island Iced Tea, and playing a friendly game of gin rummy – welcome to the world of Jeffrey Winnick (Jimmy Brewer), aka “The Flamingo Kid”, his middle class family still living in the “old neighborhood”- Brooklyn, all his father Arthur (Adam Heller) a plumber, wants from Jeffrey is to work in a mail room for the summer and then go on to college. But after tasting the sweet waters of the “El Flamingo” as a “Cabana Boy”, including meeting his dream girl Karla Samuels (Samantha Massell) and now emulating his “new hero” Auto Dealership Kingpin and all around reigning Gin Rummy Champion, the bombastic, nefarious Phil Brody (Marc Kudisch) and with Phil’s enticement of becoming a rich car salesmen, will Jeffrey defy his father’s wishes, or will he learn that there is no place like home and family. 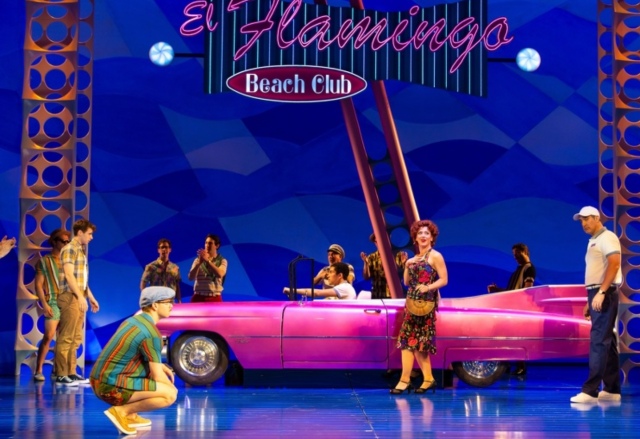 As stated, “The Flamingo Kid” is destined for Broadway- but in the immortal words of Tom Hanks in the film “You’ve Got Mail – “the project needs tweaking”. So let me kvetch for a little bissel – a little bit. Firstly, I am strongly suggesting that lyricist Freedman and composer Frankel add a signature song entitled “The Flamingo Kid “, utilizing either a tarantella, tango or even the Horah – a traditional Hasidic- style Jewish Circle Dance to accompany the song. Hey what would “Hello Dolly”, “Bye Bye Birdy” or even “Oklahoma” be without their signature namesake song – hmmmm- I’m Correct right? Second, give back Jeffrey’s little “eating tick” – as seen in the film version, where he “hummah, hummah, hummah” talks to his food with every bite, it’s endearing and gives the character a comedy fidget so richly needed. Third, this is a small request, remove the “Beverly Hillbillies” TV theme music overheard during the “first act Brody home scene” and replace it with the theme of TV’s “The Real McCoys”- it would be  a wonderful homage to original Brody- Richard Crenna, who also starred in the popular ‘60’s television series.

Marc Kudisch and the cast of The Flamingo Kid 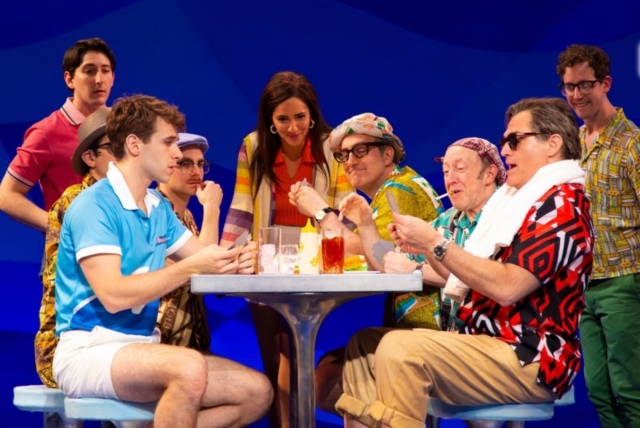 Marc Kudisch and the cast of The Flamingo Kid

Beyond adding a signature “The Flamingo Kid” song to the score list, many of the tunes in the musical are catchy and creative especially “Sweet Ginger Brown”, the notorious “The Cookie Crumbles and my two favorites- “Rockaway Rhumba” and “Blowin’ Hot and Cold”. Please note we were so pleased that a real 12 piece orchestra accompanies this production.

Our actors – our entire cast shines throughout- however, Marc Kudisch as the “Sweet Ginger Brown” Phil Brody steals the entire show, it is his to command and he knows it! What a voice, what a performance, what an actor, – he was born to play this comedic bigger-than-life character, a perfect pairing of actor and role and we are so appreciative! We also single out and send  kudos to the oh-so talented, Adam Hiller as Arthur Winnick, Liz Larsen as Ruth Winnick, and Lesli Margherita as Phyllis Brody- what a triple treat – thank you! The coveted “Howard Noticed You Award” is richly presented to Gregory Rodriguez as music icon “Marvin” – you were an explosive force on stage not to be denied- excellent stage presence and performance. Gregory- though this may be a small role, we envision major theatrical projects in your future, you are a scene stealer of the highest caliber. Enjoy! 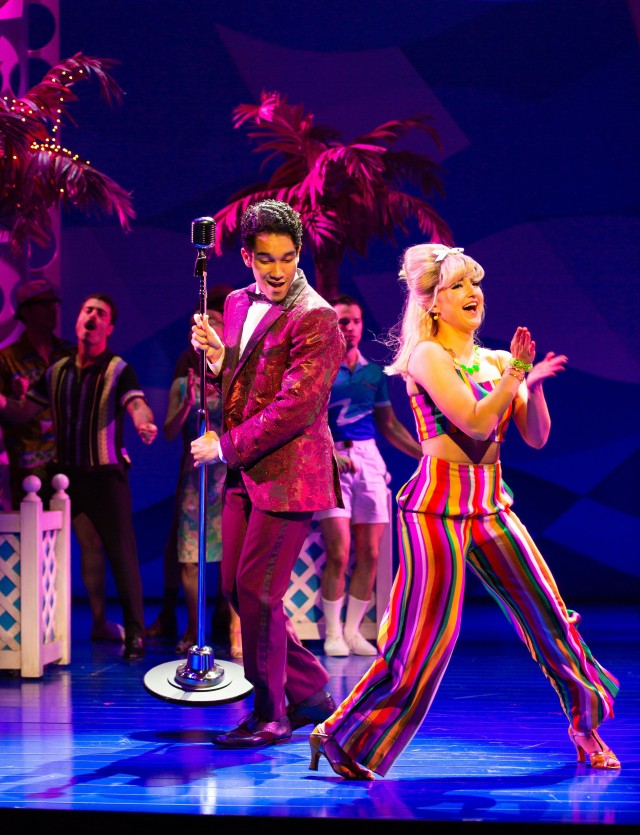 Tickets for the Hartford Stage production of “The Flamingo Kid” are on sale now and can be purchased by calling (860) 527-5151 or by visiting http://www.hartfordstage.org. Weeknight and evening performances begin at 7:30 p.m. Matinee performances are Saturdays, Sundays and select weekdays at 2 p.m.

Howard Steven Frydman is General Manager and Executive Director of BATV – Channels 5, 95 & 96 and a member of the CCC. Please feel free to contact Mr. Frydman with your thoughts and ideas at TheHoward24@gmail.com.