The Howard ~ Theater Review – “Nunsense” at Playhouse On Park

The Howard’s Exhale – “Saints Be Praised” – POP’s “Nunsense” is heavenly!

Hot cha cha!! Thank heavens for this divinely delicious devotional rendition of the musical comedy “Nunsense” – book, music and lyrics by Dan Goggins – and I must truly confess, that  after reviewing, – “I have the joy, joy, joy, joy down in my heart, down in my heart to stay” for this absolutely stellar production! “Nunsense”, is directed and choreographed by Darlene Zoller, with music direction by Melanie Guerin and “habit-wear” by costume designer Lisa Ann Steier – please take note of the “Princess Leia”, “Flying Nun”, and the “Margaret Hamilton” stylings. “Nunsense” is a “must see” event and kicks off a very exciting 11th season of professional theater at the always popular Playhouse on Park in West Hartford, Connecticut.

Cast of Nunsense at Playhouse On Park

(Genesis 21:1-6). … “Give to us laughter, O Source of our life”. Five angels, five fabulous actors –  Amanda Forker, Brandi Porter, Hillary Ekwall, Lily Dickinson, and Rachel Oremland, believe you me, light up the POP stage in song, dance, wit, whimsy and just pure joyfulness that’s truly a heaven spent two hours of a “going to prayer meeting” hijinks!  The Genesis of “Nunsense”, this musical sensation, which has generated numerous spin-offs and sequels, was originally a line of nun-quipped greeting cards by Goggins before it was expanded first into a cabaret showcase and then eventually opening in 1985, off-Broadway for a ten year run at the Douglas Fairbanks Theater, with Connecticut’s own, Semina DeLaurentis starring as the original Sister Mary Amnesia. 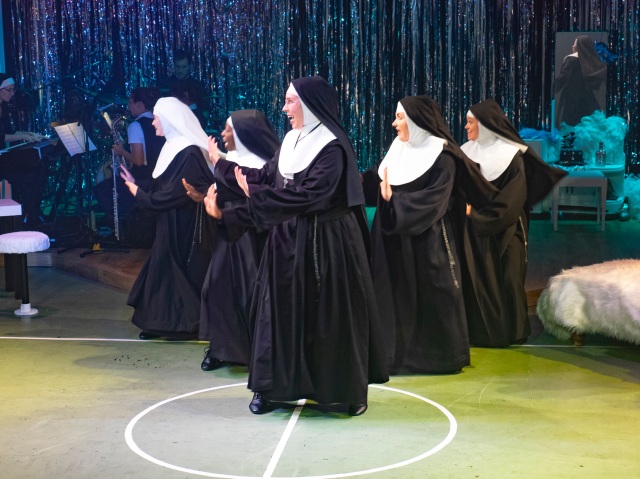 The “Good Story” according to Goggins – come meet five of the 19 surviving Little Sisters of Hoboken, New Jersey. A tragedy has once again befallen the sisterly order, – oy vey – a tale of woe – what could it be?! Originally a missionary order that ran a leper colony in the south of France, ahem, I mean on an island south of France (please take note of this important fact) until the sisters themselves started to physically fall apart and they returned back to the good ol’ USA. Yet now another act of Armageddon has occurred – a culinary disaster of the most biblical proportions-  Chef Sister Julia, Child of God (ahem) has unfortunately prepared her infamous vichyssoise for a final last supper, tainted and oh-so deadly, that 52 of the sisters are heaven-sent. The Little Sisters of Hoboken, have only enough funds to bury 48 of the 52 sisters – Sister Mary Regina/Reverend Mother (Amanda Forker) has spent the extra funds needed for burial on a brand new HD 4K Television- what to do – WHAT TO DO?! Join Sister Mary Hubert (Brandi Porter), Sister Mary Amnesia (Hillary Ekwall), Sister Robert Anne (Lily Dickinson), and Sister Mary Leo (Rachel Oremland) as we ALL learn “How do you Solve a Problem like NUNSENSE”- you mostly just laugh!!!

Folks – POP’s production of “Nunsense” is a musical phenomenon that is not to be missed – sweet, funny and endearing. Major kudos go out to Director and Choreographer Miss Darlene Zoller – the success of this production is due in large part to her selection of the right actor for each role and Miss Zoller’s amazing choreography- bravo. One minor quibble- the sequence of the Reverend Mother getting “high” started to get a bit long in the tooth after several minutes and could use some editing. As you can imagine, the full weight does fall on our five Hoboken Sisters- Miss Forker, Miss Porter, Miss Ekwall, Miss Dickenson, and Miss Oremland –  they are all terrific-singing dancing, acting – they do everything right and a most appreciative audience can see they cherish their respective roles. I do want to send out a coveted “Howard Noticed You Award”  to the talented Miss Lily Dickinson- tremendous voice range, outstanding comedic timing and “you stole the show” whenever you were on stage- good job!! “Nunsense” is absolutely stellar and sure to please those with memories of parochial school and saintly sisters- a pure joy to behold. Enjoy! 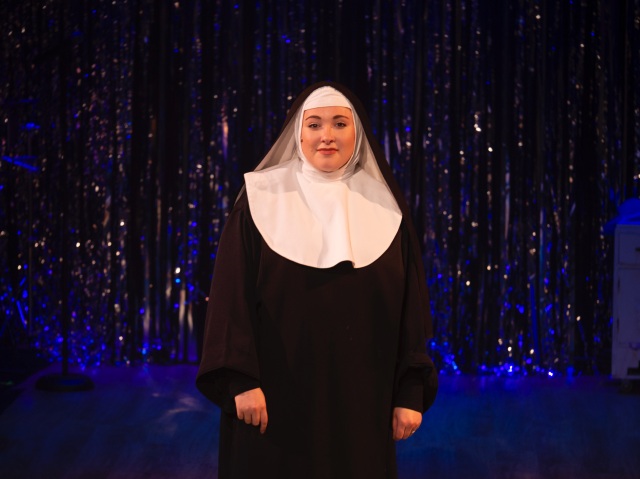 Tickets for the Playhouse on Park’s  production of “NUNSENSE” are on sale now and can be purchased by calling the POP box office at 860-523-5900 x10 or visit www.playhouseonpark.org. Playhouse on Park is located at 244 Park Road, West Hartford, CT 06119.

Howard Steven Frydman is General Manager and Executive Director of BATV – Channels 5, 95 & 96 and a member of the CCC. Please feel free to contact Mr. Frydman with your thoughts and ideas at TheHoward24@gmail.com.