The Howard ~ Theater Review “Pride & Prejudice” at Playhouse on Park

Who’s your little who-zis – Who’s your turtle dove – Who’s your little who-zis -Who do you love? * The Who-zis in this case – the extraordinary Playhouse on Park’s production of playwright and actress Kate Hamill’s innovative adaptation of the classic romance novel by Jane Austen, “Pride and Prejudice”, directed by Jason O’Connell, Choreographed by Joey ( Lets Do The Hustle) Beltre, and starring Kimberly Chatterjee as Elizabeth “Lizzy” Bennett and Nicholas Ortiz as Mr. Darcy.

Who’s the little what’s-it – That you’re dreaming of? Who’s your little who-zis – Who do you love?  The love you ask – why it’s the most endearing love tale in literature- the proud Miss Elizabeth Bennett and the prejudice Mr. Fitzwilliam Darcy- or is it the other way around? – even Meg Ryan got it wrong in “You’ve Got Mail”. No matter what- this production is a sure thing of beauty to behold! Folks – let me tell ya – I am simply in awe of this zany, romantic romp that is currently being presented at POP. Enough said? No way – let me tell ya more! 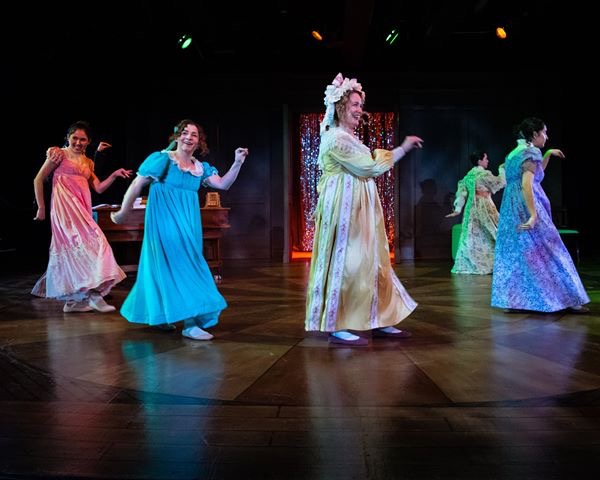 This production is a perfect theatrical centerpiece of actors, dialogue, music, and production – a bravo to Artistic Directors, Sean Harris, Tracy Flatter, and Darlene Zoller for including Kate Hamill’s play as part of the POP season. After seeing this production I do indeed have a case of the kvells – I simply celebrate this lovely rosy production of   “Pride and Prejudice”, its humor, its enthusiasm, its captivating nature, its staging, and the music- “Lets Hustle”, and all the other incidental tunes – from “Rocky”, “The Muppets – Rainbow Connection”, Michael Jackson’s “Thriller”, etc.  – thanks again Joey Beltre! In fact, I would go further in stating – I would so gladly like to propose to the POP A.D.s  that you include this production yearly- as part of a POP/Jane Austen Romance Festival – in fact the night I took in the  production, an entire group of Jane Austen Fans, came to the program dressed in “Victorian” garb –  (P & P  is actually set in the “Regency Era”) from her novels (or for those who only saw the film versions) and are situated throughout the POP theater the day I do my review- it added greatly to the atmosphere and everyone’s enjoyment of the POP production. 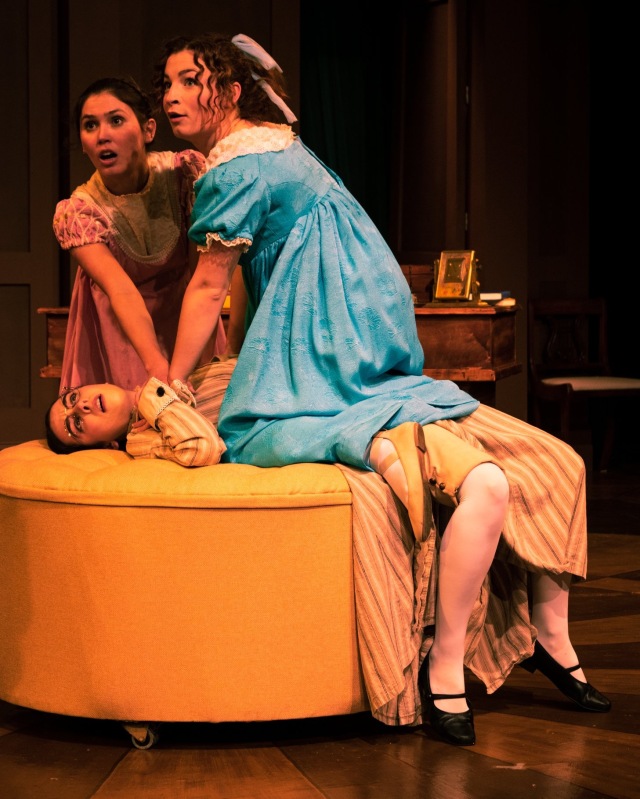 I am certain, that you dear reader are familiar with the story of “Pride & Prejudice”, surely you have read the Austen book or at least seen the numerous adaptations be it PBS, Movie, Film, be it on the Hallmark Channel, or all its derivatives – P & P vs Zombies, P & P in outer space, I just saw a new TV reality series  “Bride and Prejudice” – oy! So the tale nightingale, plain and simply – Mr. Bennett, (Sophie Sorensen) a wealthy land owner has 4 unwed daughters – Jane (Nadezhda Amé), Mary (Jane Bradley), Lydia (Kelly Letourneau), and Elizabeth (Kimberlee Chatterjee) aka “Lizzy”. Unfortunately, his estate cannot be passed on to his daughters – oh my what to do? Leave it to their resourceful mother (Maia Guest) to find them each  “a wealthy guy” to wed at the upcoming “ball”. Down comes the “Disco Ball” and did someone say “Let’s do the Hustle” – sure enough the gals soon are introduced to the wealthy Mr. Bingley (Jane Bradley) and his even wealthier friend, the ever aloof Mr. Darcy (Nicholas Robert Ortiz). So who hooks up with who? Either read the book or head over to POP for this effervescent and saucy Austen rework.

The cast is a joy joy joy deep in my heart – with all  the actors intermingled portraying either male and female characters – they are all terrific! Yet at some point I would so enjoy seeing an all female cast portraying all roles. Of our two male leads, Nicholas Ortiz as Mr. Darcy, is the  only actor in the troupe to portray one character, Mr. Darcy, he is original to character, providing correct aloofness. Mr. Matthew Krob portrays three characters, Mr. Collins and Miss Bingley – both are wonderfully comically interpreted, though his characterization of Mr. Wickham is portrayed a bit too heroic and lacks that “hiss-able” moment associated with the character. We give kudos to both Kimberly Chatterjee as “Lizzy B.” and Sophie Sorensen as “Mr. Bennett” for their standout performances – truly star quality!! Though the entire cast shines throughout, the coveted “Howard Noticed You” Award is presented to Kelly Letourneau, in her dual roles as both Lydia Bennett and Lady Catherine. Miss Letourneau – you provided an effervescent and all together an unforgettable performance that one can surely state would make  a “parent proud” event but I simply state you are a “phenom”!  Say, when you get the blue-zis, Who you thinking of, Who’s your little who-zis, Who do you love? Why “Pride & Prejudice” at POP of course! Enjoy!

Tickets for the Playhouse on Park’s production of “Pride and Prejudice” are on sale now and can be purchased by calling the POP box office at 860-523-5900 x10 or visit www.playhouseonpark.org. Playhouse on Park is located at 244 Park Road, West Hartford, CT 06119.

Howard Steven Frydman is General Manager and Executive Director of BATV – Channels 5, 95 & 96 and a member of the CCC. Please feel free to contact Mr. Frydman with your thoughts and ideas at TheHoward24@gmail.com